Dry rot damage is often mistaken as from a termite damage, due to the appearance of the damaged wood.

Dry rot (also known as brown rot) is one of the most damaging forces on household wood in the world.

Approximately 20 billion board feet of timber is destroyed by wood rot in the United States each year -- far more destroyed wood than is damaged annually by fire!

Replacement wood used to repair damage caused by wood rot accounts for almost 10 percent of the annual wood production in the U.S. alone.

In the United Kingdom, dry rot problems have been credited for dealing about 150 million pounds worth of damage annually, and wood rot in general leads to about 17 billion dollars of damage each year in the United States.

Basement Systems of New York has a long history of experience in eliminating, preventing, and controlling dry rot in homes throughout New York, including Port Jervis, Wallkill, Highland, Stony Point, Hyde Park and areas nearby.

If you have a dry rot problem in your home and would like more information, contact us by phone or e-mail today for a free dry rot control estimate!

What is Dry Rot & Brown Rot?

"Dry Rot" is a term most often used to describe a particular kind of dry, cracking, rotting wood. However, dry rot occurs because of a variety of brown rot species, most notably the "true" dry rot fungus known as Serpula lacrymans. Dry rot originally got its name from the thought that it didn't need water to live, but instead used a fermentation process to survive. Research long ago proved that theory untrue, and dry rot is now more appropriately called "brown rot."

Dry rot needs much less moisture than other types of wood-rotting fungi -- a wood moisture content of just 28-30% -- to survive. While there is no official proof on the subject, many contractors have observed that dry rot also will not grow on wood with too much moisture. 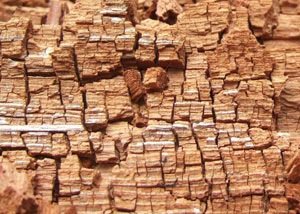 The USDA Forest Service reports that just a 1% decrease in the weight of dry-rot-damaged wood can lead to a 75% loss [PDF] of its the wood's toughness overall.

A common first indication of dry rot in a home is the appearance of a "red brick dust".

This red dust is actually an accumulation of fungal spores that are covering the surface, waiting for the proper conditions to start to grow.

When Does Dry Rot Damage Occur?

An outbreak of dry rot commonly occurs several months after a household water event, such as flooding, bursting washing machine hoses, a failed water heater, or leaking pipes. In some cases, water or moisture may have been trapped in a building cavity as the home was being built.

Dry rot is also common in vented crawl spaces and basements with groundwater flooding. It's often not detected until the damage is already very significant.

Preventing Dry Rot in a Basement: Remove all standing water sources, then install a plastic vapor barrier on the walls and floors. Install a self-draining dehumidifier powerful enough to dry the area. (At least a 100-liter model).

Preventing Dry Rot in a Crawl Space: Seal off all crawl space vents and door covers. Encapsulate the crawl space with a crawl space liner, then install a self-draining crawl space dehumidifier.

Basement Systems of New York can help you eliminate dry rot problems at their source. We can dry your basement or crawl space, eliminate flooding problems, and seal out humidity.

This not only eliminates dry rot problems, but also creates an environment that is inhospitable to mold, wet rot, and mildew, while helping to keep out termites, carpenter ants, cockroaches, crickets, and other household pests. Crawl space sealing products can also do double duty as insulation, providing you with added energy efficiency.

We offer FREE, no-obligation dry basement and crawl space quotes in our service area. We can answer all your questions and point out the sources of humidity and moisture in your home.

Get a FREE Quote!
Related Pages: