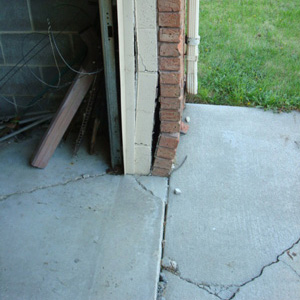 Pushing problems. Street creep can damage a foundation when concrete slabs in a driveway or road expand or move, pushing against the edge of the foundation.

Your concrete slab driveway and foundation is cracked or damaged.

How we can fix it: 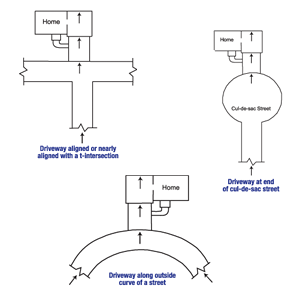 Here are three common conditions where street creep can cause foundation damage.

Street creep is a common foundation problem that's caused by the thermal expansion and contraction of concrete streets and pavement surrounding a home.

Like many materials, concrete expands when it's hot and contracts when it's cold. Contractors place expansion joints in sidewalks, driveways and other exterior slabs so that temperature-induced expansion and contraction won't cause a slab to crack.

Expansion joints divide a large expanse of concrete into individual slabs that can expand and contract independently. Temperature fluctuations throughout the seasons will cause these joints to widen in the colder months and narrow during hot weather.

Problems with street creep begin to arise during the cold winter months, when the widened joints become filled with materials like sand or gravel.

As temperatures rise again during warmer weather, the concrete expands. But if joints have filled with sand and gravel, they can no longer absorb this movement. Instead, one slab will push against another.

Once they're filled with debris, expansion joints can no longer do their job. The entire expanse of concrete expands as a single unit, causing the street to "creep." Street creep exerts tremendous pressure at the edge of the concrete, where a driveway meets a garage slab or a house foundation wall.

Damage from street creep is a slow process - the elongation of a typical block-length concrete street is generally only a fraction of an inch each year. However, over time, the movement will add up to several inches, which will mean potentially serious damage to your foundation.

Street Creep can be detected by these four common signs:

Fortunately, there are easy, effective ways to address street creep damage problems. If you would like a free foundation repair quote for your problem, call or e-mail us today!

At Basement Systems of New York, we recommend repairing damage done to your foundation by street creep with the GeoLock® Wall Anchor System.

Designed by Foundation Supportworks, this street creep repair system is currently being used by hundreds of foundation contractors across the United States and Canada. It provides a warrantied solution for permanently repairing your foundation issue. 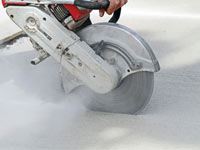 Cutting Expansion Joints In The Drive

To prevent future expansion damage to your home from street creep, your contractor will begin by cutting new expansion joints in the driveway.

New expansion joints will provide additional expansion and contraction space to end the street creep cycle. After cutting the joints, all excess concrete and debris will be cleared away. 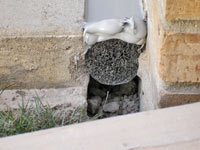 All expansion joints are filled with a resilient foam backer rod that will expand and contract naturally with concrete movement.

Applied over the backer rod, polyurethane sealant will prevent sand, gravel, and other debris from entering the crack. This ensures that the expansion joint will be able to function properly. 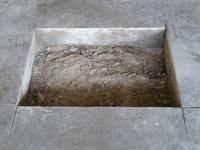 In cases where street creep has damaged foundation walls, wall anchors can be installed to stabilize and restore these walls. A soil access point is required at each wall anchor location. Using a concrete saw, a technician will create a square cutout in the garage slab at each soil access point.

Once all access points have been created, your contractors will dispose of all debris and keep the work site clean, safe and well organized. 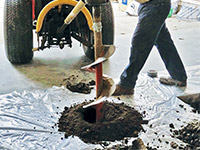 Next, a plastic liner is placed on the ground around each slab cutout made in the previous step.

The liner will keep your garage floor clean as technicians use a power auger to bore holes where earth anchors will be installed.

The excavated dirt is saved so that it can be returned to the hole after the installation is complete. 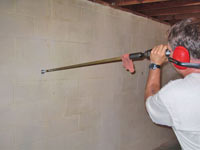 Unlike helical tiebacks, foundation wall anchors need only a small 1-in.-diameter hole to be drilled in your foundation wall for each anchor's steel rod to pass through. This is applicable for both poured concrete walls as well as concrete block walls.

Once holes have been drilled, the steel rods are driven through the soil to meet up with the earth anchor holes made in the previous step. 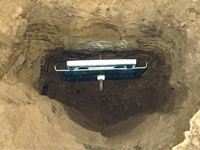 Inside each hole, a steel wall anchor is attached to the rod that was driven through your basement wall. Holes can then be filled with soil and covered with poured concrete to restore the garage slab to its original condition.

Soil pressure keeps each earth anchor in a fixed position, allowing wall anchors and adjustment nuts to exert pressure on the foundation wall. A galvanized coating on all components ensures corrosion resistance. 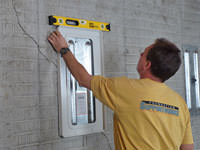 Inside your basement, a steel wall anchor plate fits over each protruding steel rod. Technicians will tighten a nut on the rod's threaded end to apply pressure against the foundation wall. The wall plate helps to distribute this clamping pressure.

Once installed, your wall anchor system will permanently halt the inward movement of your basement walls from expansive clay soils. 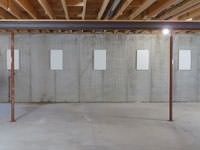 Once the wall anchor system has been installed, your contractor may attempt to straighten the bowed or buckling walls over time by tightening the nut on each steel rod.

To keep your basement looking its best after installation, we also recommend our Hide-A-Way® Wall Anchor Covers. These are an especially good option if you're finishing your basement. Their low-profile design will fit in nicely with the design of your finished basement, while allowing future access to anchor plates.

We Do Street Creep Repair In New York!

At Basement Systems of New York, we have warrantied solutions for repairing street creep damage to your foundation. To help you decide if our solutions are right for you, we offer free written street creep repair quotes throughout our NY service area.

We serve the Middletown, Poughkeepsie, Newburgh, area, nearby areas such as Spring Valley, Monroe, Kingston, Wappingers Falls, Monsey, New City, Nanuet, and the surrounding regions. To schedule an appointment, contact us by phone or e-mail today!

The existing expansion joint between the driveway and garage is fully compressed.

Even when the joint appears wide enough at the surface, the concrete may still be in contact underneath. This means that when the street expands with heat, your driveway is being pushed into the rest of your home. 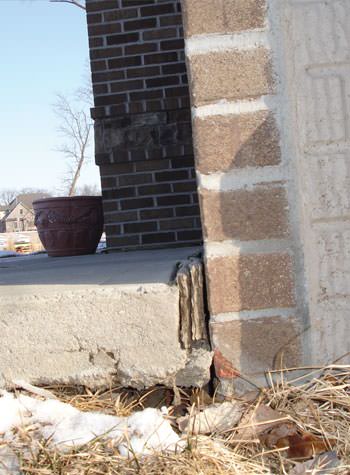 The foundation walls on either side of the garage door are being pushed inwards by the driveway slab.

This is a sign that when the concrete pavement expanded and lengthened, pushing into the concrete driveway, there was insufficient compression space within the expansion joints. The only place for the driveway slab to go was through your garage walls. 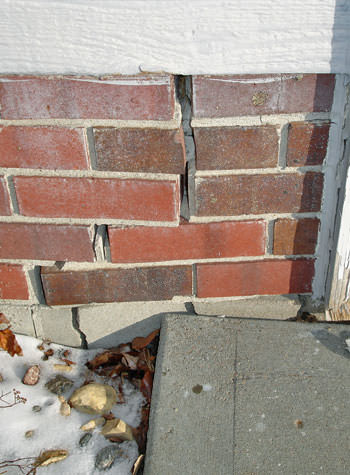 Gaps Behind The Foundation Walls

Gaps have formed behind the foundation walls on either side of the garage door as the garage slab is pushed rearward.

Installing new expansion joints in the driveway and installing wall anchors will restore your foundation walls to structural stability. 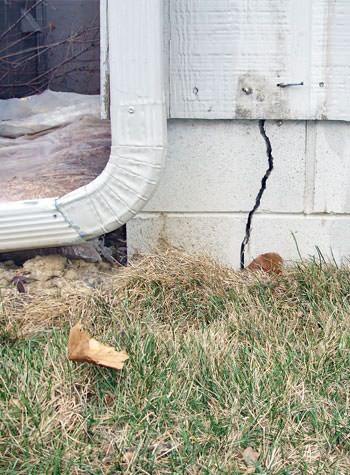 Basement walls or foundation walls are pushed out by the garage slab.

At this stage, the damage caused by street creep has lead to a potentially serious foundation issue. It's important to address this soon -- before the damage becomes any more significant. 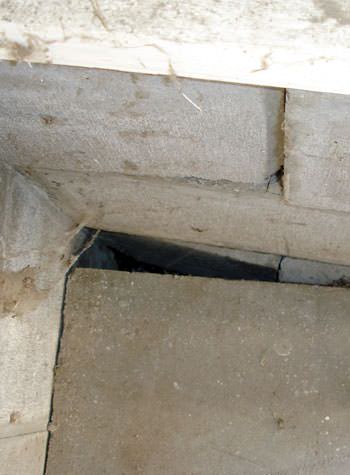